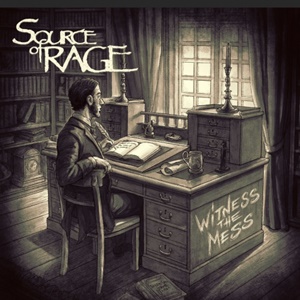 Rarely in today’s metal landscape do you find a melodic death metal act with three brothers together – but that’s the case here for German quartet Source of Rage. Guitarist Oliver Roffmann is the lone non-hereditary member outside of the Krause triad (bassist Thilo, drummer Riko, and vocalist Marko rounding out the lineup), now up to their second album Witness the Rage. They’ve been able to make the Wacken Metal Battle national finals, participating at the official festival as well as gain other seasoning through other smaller and mid-sized gigs and festival opportunities. The proof of respect though comes in this latest outing, unleashing ten-tracks of groove-laden melodic death metal that has one ear on the past, while many sensibilities in the present to probably find favor with a modest array of younger followers.

Stunted djent/metalcore riffs and tempos weave their way in and out to key sequences while never forgetting about the sturdy main hooks and catchy screams plus clean chorus moments to make “Purify Me” an early favorite on the front half of the record. A slow burning guitar run with semi-harmonic textures soon transforms into energetic death picking and slamming snare/double kick parts with “Construe the Last Word” – a seven-minute plus outing that takes elements of old In Flames and Soilwork into modern groove metal bliss, the serene acoustic/distant vocal switch a surprise before the mesmerizing electric break and progressive tempo shift appears. You get the sense that these musicians are as well versed in the swinging earworm aspects of seamless guitars, bass and drums which put Black Sabbath and the self-titled Metallica record into millions of households at they love their melodic death metal – “Aware” and “The Eyes of the Restless” adrenaline-oriented affairs that pump up audiences in focused, tighter windows. Marko’s ferocious, relentless delivery when pushing out the grit-fueled screams possesses that clean, cyber duality when necessary – its evident Anders Fridén of In Flames is a strong influence, check into “Dark Project” to hear all aspects of that versatility, the quick bass spotlight from Thilo a surprising dynamic uplift.

When it comes to the overall impact Witness the Mess has for the longevity of the group, it’s another step in the right direction bridging influences from decades of artists to try and establish a niche for Source of Rage. At the very least, many concert goers will probably seek this out after hearing these tracks aired live when the band comes around.