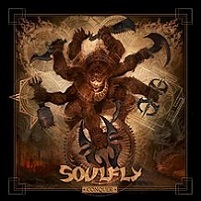 As a former card-carrying member of the Sepultura Fan Club, this scribe’s affinity for Soulfly lasted about a week in 1998, as Fred Durst’s impotent raps on “Bleed” wore thin about as quickly as the tattooed buffoon’s hairline. The self-titled debut wasn’t really all that; same goes for the dismalPrimitive and Prophecy, and Max (and Sepultura) were left in the dust. Fast-forward a couple of years and it seems like Max has turned things around, starting with 2005’s Dark Ages and now the combo of Cavalera Conspiracy’sInflickted along with Conquer prove that Max has some gas left in his dreadlock-powered tank.

Conquer is surprisingly heavy in spots, devoid of the oft-hokey instrumentation that bogged down Soulfly’s early material. Thankfully, there are no extended jam sessions – the bulk of Conquer is no-frills, down-tuned and driving metal, vaguely reminiscent of Cavalera’s work on the Sep’s Chaos A.D. album.

While numbers like “Unleash” and “Enemy Ghost” are simple potent pit-movers, it is the guitar

work of Marc Rizzo that really stands out. Rizzo’s fluid and melodic solos add some spice to “Paranoia,” where he rattles off a very Andreas Kisser circa 1989 lead run. Rizzo also proves his worth with some killer shredding on “Warmageddon” and some cool flamenco jamming on the otherwise brutal “Doom.”

and/or chorus without mentioning the song title, which is fine if you’re trying to decipher exactly what song you’re listening to, but one would think after over two decades of songwriting, Max would try some new tricks in the vocal department.

Far and away the best Soulfly album, Conquer and CC’s Inflickted prove that Max may not need the Seps after all. Conquer is pure, classic Max, without the pretentious Brazilian instrumentation and pointless guest spots (there are only two here – Morbid Angel’s David Vincent and Throwdown’s Dave Peters). Had this been the first Soulfly out of the gate, the never-ending talk of a Sepultura reunion would probably be reduced to a whimper. Perhaps that will happen now.