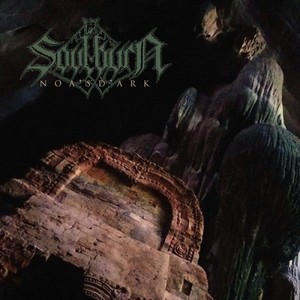 An extreme metal entity that garnered some initial buzz due to having Asphyx members (as well as Rogga Johansson) in its 2013 line-up. From that particular period, only guitarist Eric Daniels remains, but the band’s old school approach to black metal (a la Bathory) still stays true. Noa’s D’ark sees the band continuing to move along at their own particular pacing – for better or worse.

Soulburn’s buzzing black metal sound also has a generous helping of doom and death metal in its mixture. The plodding pace of it is quite akin towards doom at times, but the band does well to work some faster, blackened thrash bursts into the sound to keep it from becoming entirely hum-drum. But that’s really precisely the problem with Noa’s D’ark. Despite the band’s best efforts to switch from rumbling slow tempos to more aggressive and thrashing in a single track (see “Anointed – Blessed – and Born for Burning”), nothing really sticks. Without the ripping blastbeat adrenaline rush that many blackened acts rely upon, it all comes down to the melodies. Sadly, there’s not much excitement to report in that department. There’s nothing inherently bad about any particular track, but they suffer from a lack of anything distinguishing for the most part. The melodies are there, but nothing really sticks with the listener to bring them back to the table for another round. Opening with the longest track, “The Morgue of Hope,” does the band no favors either. The song takes a while to get into gear and moving from doomy chugs into more blackened territory, and the driving riff isn’t really compelling enough to justify the length of the track.

Noa’s D’ark feels disappointing. The act’s 2014 formula worked well enough, but the leaning in on more doom tempos and not enough strong melodies keeps Soulburn from operating at their best. Soulburn fans may find some solace here, but it doesn’t leave much outside of that particular niche.