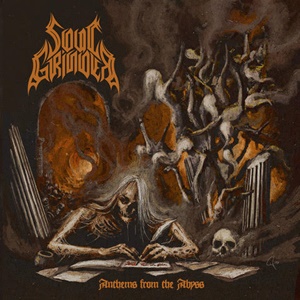 When aiming to establish reliability or consistency in the metal realm, it helps to have a healthy, creative impulse to grind out the material, release it, plus perform on any live stage that will potentially increase the following. That’s the platform Soul Grinder out of Germany have set forth since 2018 – issuing two EP’s and a debut full-length Chronicles of Decay as a death metal trio, keeping the production duties in house to arrive at this second album Anthems from the Abyss. The incorporation of old school influences from groove/blasting measures to tremolo picking, screams/growls, yet positioning themselves in a modern context through certain tones/production techniques allows these ten tracks broader appeal for a scene craving fresh blood.

The abilities of drummer Mate ‘Balrogh’ Balogh to move from insane snare/kick blasts to comfortable mid-tempo passages with engaging fills from one measure to the next keep “Insidious Resurrection” top of mind as far as mesmerizing in terms of memorable, fluid musicianship – the lurching doom twist unifying hordes as bassist Mathias Junge and guitarist Jan Resmer trade off savage growls/screams. Haunting keyboards match the exotic chord choices that shift from cultural textures to blistering paces, Jan’s finger dalliance captivating for “Soul’s Mirror” – another cut that synthesizes faster US death metal with veteran European finesse at all the appropriate moments. Shifting speeds seamlessly from chaotic insanity to tribal/militant groove proceedings keeps a heightened aural sense of anticipation – “I Am the Silencer” brilliant in this regard, between the stop/start transitions, simplified barking chorus, and killer crunchy main riffs that produce incessant windmill activities. Rarely do you have a set of musicians that can pull from styles as diverse as 90’s-era Morgoth, Vader, Behemoth, and Cannibal Corpse to put their own, modern dynamic appeal on things – but that’s what you have hear top to bottom, even when choosing to emphasize a groove-laden number a la Jungle Rot for “The Last Supper”, the riff to drum to sinister vocals serving a triple threat that smash through like a battering ram.

A tightly delivered death metal record in forty-two minutes, Anthems from the Abyss contains enough fight, angst, diversity, plus killer musicianship that Soul Grinder should have no trouble adding more followers to their style – hopefully continuing that upward ascension from the underground.