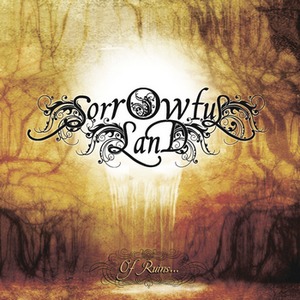 As the days get shorter and the temps get colder, there’s no better time of year to check out some doom metal. When it comes to doom, of course one of the labels that has continued to strike gold is that of Solitude Productions. And they’ve found another winner for the bleak variety with the one-man Ukrainian atmospheric doom act Sorrowful Land.

With a sound that is more rooted in the Finnish doomy traditions than anything else (Shape of Despair, for instance), Sorrowful Land pulls off all of the melodies that you’d expect, and relegates them to the guitars. There’s no clean vocals, sans some spoken word moments, and the keys/piano melodies are often subdued below the level of the riffs and guitarwork. It’s a nice change of pace, and the music is no less compelling because of it. On the contrary, the gloomy and downtrodden melodies that make up the bulk of the album shine with their almost ethereal tones (sometimes with an early Katatonia vibe) that work opposite of the bruising and lumbering riff/bass work. Some quieter moments (see the title track) enrich the scenery and give some added depth outside of the usual crushing volumes. The growls come off strong as well, keeping things oppressive and dark while still displaying a capable range of anguish and grief.

A mix of funeral doom tones with some atmosphere to spare, Of Ruins… is a notable addition to the collection if you are looking for some added gloom. This is a fully realized debut that sounds more like the workings of a full band after a few initial recordings. The type of album that works best on a cold, quiet day, watching the snow fall.