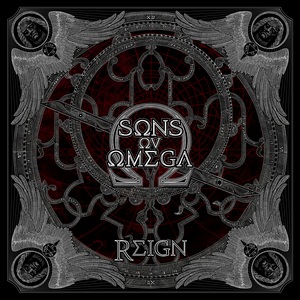 One of the go-to labels for sleeper hits over the past two years has been Black Lion Records. Building a base of extreme metal acts (Hyperion, Mist of Misery, and Wormlight…to name a few), more seem to be turning their head in the label’s general direction. Sons ov Omega are the newest find, with Reign being their first release, and hangs equally well with the label’s usually high quality products.

Merging black metal and melodic death metal isn’t exactly innovative, but Reign demonstrates that they’ve got some serious songwriting chops. Moving from more visceral and thrashy sections to epic and melodic blackened passages on a whim, there’s plenty to keep the listener’s ear at the ready, and they also accentuate with more progressive riffs from time to time. Varied cuts from the dark melodies of “Kali” to the blistering thrash of “Fields of Ember” to the epic start-off “Pandora” serve to keep the extensive hour-plus runtime one that never falters. Keyboards are tastefully applied when needed, uplifting the atmosphere into either more epic-sounding territory, and a few songs have some oriental-influences to the sound to spruce things up further. Vocally, the diversity matches the palette of instrumentation, with a varied extreme approach combining with some strong cleans that fit the sections to a tee – never feeling tacked on or just there for the sake of being involved.

Much to enjoy about the start of Sons ov Omega’s debut Reign. Melodic black and death fans will surely find the more classical approach (not a hint of modern trappings here) to be a refreshing change of pace from the norm even if it stays within the confines of what may be expected. A grower of an album that sets the band on a path towards bigger and better things.