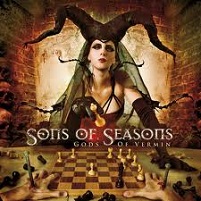 and you’d imagine a top hat or pencil mustache at the very least Oliver Palotai (Doro, Kamelot) certainly hasn’t strayed too far from his comfort zone with Sons Of Seasons. Although it has to be said he takes a tried and familiar genre and, while not roughing it up and moving things around completely, manages to make it sound interesting to even the most jaded of ears. The strength this Gods Of Vermin boasts is that time and effort clearly went into the songwriting, with no one person allowed to run riot through the corridors claiming they know best.

Take “Wheel Of Guilt,” a pretty rocking tune, with some nice guitar work and a wide open space where the vocals survey the landscape, with keyboards tinkling gently in the background. Singer Henning Basse (Metalium) has the perfect voice for this, able to deliver lines in a powerful way without over-singing them and then switching to harsh, gruffer tones when the need arises, all without ever burying the songs in his performance. There’s always plenty of room for the instrumentalists too, with bass runs and boings filling out the background, proving that this is a band of equals with no one member running the show.

Sons Of Seasons may fit in perfectly on the European festival stages surrounded on either side by old-school thrash bands and female fronted symphonic metal acts, but it’s difficult to imagine how well their sound will travel

. With guitarist/composer Oliver Palotai at the helm they’re going to get some attention from the old guard but with Simone Simons of Epica fame/infamy lending her howl to “Fallen Family” they should be able to entice some of the newer fans of the genre into the fold too.

That said, unless you’re a fan of the genre already then there’s going to be little here to woe you. This is not the great crossover

record, more a new standard bearer that’ll hopefully help the likes of Blind Guardian down a peg or too and stop Power Quest shite from getting a hand hold.