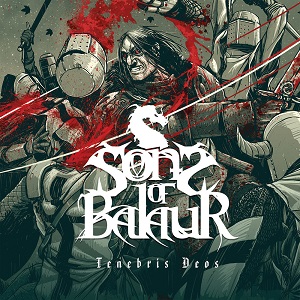 A Dethklok-esque idea where its members are based on Alec Worley’s recent Realm of the Damned graphic novel, Sons of Balaur are pretending to be a Norwegian black metal band from the early ‘90s when in actuality, they’re an assemblage of known/unknown British metal musicians. Fine. Run with it, just don’t expect Tenebris Deos to make it into the “serious” file. That is often reserved for bands not created as a companion to a graphic novel.

Sonically, Sons of Balaur work well within the confines of normalized, conventional black metal. Unfortunately, it doesn’t veer off into blackgaze or Cascadian territory (because that would really rub some folks the wrong way), but it does manage to employ virtually every sonic constant of the style since, say, 1991. The projected grinder is found on “Old Relics,” raunch-a-long jam about women with “Succubus Slut,” and thrasher with “Val Helsing Must Die,” which serves as the album’s most accessible number. And all of these cuts are laid out with crystalline precision, bolstered by a clean, tidy production job fitting for the times.

Without an idea on what Realm of the Damned actually is, Sons of Balaur run the risk of missing out on its intended audience. If one has seen/read the graphic novel, then Tenebris Deos will click. But nevertheless, somewhat of a unique idea, although making black metal cartoonish will generally draw the ire of those without a sense of humor, to which there are many. Good thing Euronymous wasn’t consulted for this. He would have vetoed Sons of Balaur in a millisecond.