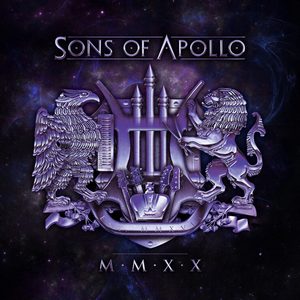 There is something to be said for taking things that normally never traffic together and synthesizing them into something ‘new’. That’s not only the essence of progressive music, but the interactions of civilizations more generally across time – there are ample precedents available. When Portnoy and company first put forward Sons of Apollo several years ago, I was admittedly a bit hesitant to jump on board. Not that progressive music can’t incorporate radio-friendly songwriting, but more so the embrace of bro-friendly radio rock (the sort that, for one reason or another, has been constant and stagnant since 2003). Psychotic Symphony was endearing as listen, due in part to smart sequencing (the oft-bland radio rock numbers were sandwiched between more progressive numbers). A few years and a lot of development later, we are here with a new release in MMXX.

In general, MMXX follows a more is more principle: the radio rock songs have bigger choruses and the proggier songs are bigger and flashier. The band no doubt took lessons from the many different receptions to Psychotic Symphony and have applied them accordingly. The differing sides of the band’s personality are more interwoven this around though that doesn’t stop them from hitting several of the radio-friendly staples – “Desolate July” is a reflective/sadbro ballad that isn’t at dissimilar from what dotted the midsection of every Cold album throughout the aughts. “Wither to Black” and “Fall to Ascend” each embody the hard rock with brains approach of the album, with nods to Rush as much as Soundgarden. Muscular journeys through simple verses and choruses that often give way to guitar and keys trade-offs before settling back into a chorus or two.

Instrumentally the album is as burly as you’d expect, both in terms of sheer sound and the interplay between the instrumentalists. The drive for simplicity and ‘attitude’ in the lyrics are occasionally awkward and much like in Psychotic Symphony Soto feels frequently underutilized. As mentioned previously, interplay, trade-offs, and solo spots come and go in between choruses. Those here for the purely progressive will find it in closer “New World Today”, a solid 16-minute journey across a variety of fronts and feels where everyone takes opportunities to shine brightly. For a variety of reasons, it is my personal favorite of the pack by a solid distance.

Though I appreciate the experience, MMXX is a strange trip. For the opposing ends of the rock music spectrum being brought together and given a metal edge – it’s hit and miss. Those that listen only to radio rock aren’t going to care about this and those that prefer ‘purer progressive’ experiences (the irony) will turn their noses up at the simple aspects. There is joy to be found here, but your experiences are likely to vary widely.