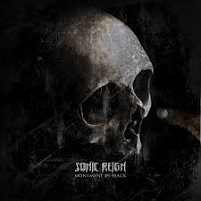 Satyricon should be bigger, and we’re not saying that because there’s a squishy soft spot for Satyr to snuggle in Blistering’s black, cold heart. As in, if you’re looking for a real commercial

black metal, it’s them. They’re so far removed from the brash, Nocturno Culto-on loan days that it’s like they’re a new band altogether, but still just as formidable. Hopefully somewhere, Satyr and Frost are getting their ducks in a row for another release, for Sonic Reign’sMonument in Black only serves to stoke the Satryricon fire. (Alliteration is fun.)

The last anyone heard from this German black combo was the 2007 Metal Blade re-release of their Raw Dark Pure album. Suffice it to say, it failed to leave a mark, and it’s not because of their rather ho-hum (and power metal-sounding name). What the duo of Benjamin Borucki (vocals, guitars) and Sebastian Schneider (drums) have done, is taken the intrinsic elements of Volcano-era Satryricon and updated them. Meaning, this is full-frontal, jarring black metal, without those unnecessary traces of pretension and computer-created orchestration. It’s raw, dark, and pure…just like the title of their last album.

None of the album’s seven tracks should give anyone fits (we’re well-aware of what a tough crowd the black metal is). The magnified chord layering on “Clouds Above the Desert” is a mini-triumph. Here, Borucki rakes voluminous guitar patterns in ominous fashion, giving the track full black metal pulsation. The rockified moments come by way of “The Whisperer in the Dark,” a song that could easily slide into a Satyricon setlist, while “A Doctrine Unreachable” has a similar approach, crouching into a slippery groove that is the embodiment of black metal, gone rock.

To state the obvious, there is a dearth of releases like Monument in Black. Since Satryricon copping hasn’t quite become fashionable, someone has to do it. Sonic Reign seem ready and willing to do so…