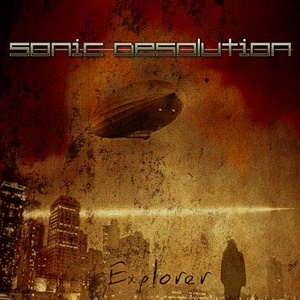 Sometimes it’s great to have a curve ball in terms of musical output even from seasoned musicians associated mostly in the hard rock/metal fields. Such is the case for Sonic Desolution – a Swedish progressive rock band with melodic tendencies, featuring a series of musicians linked to artists like Devin Townsend, Kaipa, Uli Jon Roth, Vinnie Moore, Arctic Rain, and Timecode Alpha among others. Three vocalists share the spotlight throughout the eight tracks that encompass their debut album Explorer – a record that contains classic elements for people who love early Genesis, the Flower Kings, and other offshoots.

Movements musically for Sonic Desolution appear to be subtle and slow building – incorporating melodic runs and textures even as certain intricacies gain exploration. It can be a specific bass or drum flourish that then shifts into a smooth groove part where the male/female voices commiserate into a bluesy/choir splendor as “The Waltz” illustrates. Happier, floating organ mechanics appear in tight syncopation against progressive, jazz-like electric guitar action for the follow-up “Eye to Eye”, as the soulful verses from Jan Johansen and contrasting hard rock delivery of Mads Clausen make you think of Ian Gillan battling Paul Shortino and Russell Allen in a three-way wrestling match. Kansas and Genesis elements blend together in specific guitar/keyboard-oriented instrumental moments for “Midlife Insight”, the energy build and passionate Annica Svennson melodies alluring before the quieter keyboards and airy dynamic twist takes shape. Over half of the tracks hit the eight to nine-minute plus timeframe – conventional for a progressive rock unit that has ideas to expand upon and flesh out, yet never sacrificing the hook aspect on the vocal front to keep all listeners engaged. Time signature manipulators will lay claim to the wonders of “Tranquilandia” – another stunner featuring a cinematic scope, harmony-infused verses/choruses, and a quieter, almost Morse Code-like guitar foundation.

There are many readers who appreciate more than heavy metal and its many branches. Those who love progressive rock, especially with the feel of the 70’s/80’s and infusing a bright, modern production in the mix will savor Explorer.