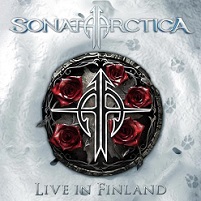 If only Sonata Arctica vocalist Tony Kakko would have worn a scarf onstage during the video recording of Live In Finland like he normally does, then our rating would have been bumped up a notch or two. But he didn’t. So much for keeping one’s neck warm and snug while performing, eh? (And no, a scarf has little bearing on our rating system at Blistering. That would be entirely too shallow of us)

As the band’s second foray into the live album/video format (the first was 2006’s For the Sake of Revenge), Live In Finland captures the Finns in two different sets in front of a home country audience. Tacked on is a CD set with both concerts, “Making-of” footage of the live show on the band’s recentmusic videos

, and a pretty entertaining documentary of the band’s Finnish and South American tours. Lots to consume here.

portion, the sound and footage is top-notch, although Kakko isreally high in the mix, which works on some of the band’s softer compositions (“Replica,” “Caleb,” and “Juliet”), but is a minor burden overall. Of course, Kakko’s soft and wispy vocals are the focal point in nearly all of the band’s songs, so perhaps the above point is moot. He does manage to fit right in on the speedier power metal cuts like “Blank File” and “Victoria’s Secret

,” though. Conspicuously absent is “The Cage,” a song that once regularly closed the band’s set, which explains the ballad-happy setlist.

on the “Special Features” DVD (DVD #2) is the most interesting thing about Live In Finland. Catching the band during the during their respective South American and Finnish tours in support of 2009’s The Days of the Grays, the documentaries

reveal Sonata Arctica to be quite the funny lot, with hilarious sub-titles poking fun at the band and their crew, along with normal backstage and hotel hijinx. Well worth the purchase of this set alone, actually.

One could make the argument the Finns are already past their prime given the lukewarm nature of 2007’s Unia and The Days of Grays, thus making their next studio foray (due next year) all the more pivotal. In the meantime, Live In Finland is a captivating view into Finnish power metal’s preeminent band, scarf or no scarf.