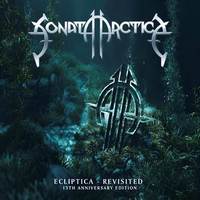 2014 has been a good year for the charismatic Finnish power metallers Sonata Arctica. To start, the band had a return-to-form of sorts, with the release of Pariah’s Child in March. A great album, it saw the band dusting off some of their power metal chops, which had seemingly been in storage for a while as the band explored more of their rock side on recent albums. These records, while certainly enjoyed by many were those three released in the 2007-2012 period, consisting of Unia, The Days of Grace, and Stones Grow Her Name. But to a lot of fans this period represented the band outside of their heyday, leaving folks pining for their former glory years, and more succinctly, times when the metal was faster and more clearly of the power variety. Not that Pariah’s Child was a complete 180, but the goods are there, and it contains a couple tracks that stand with the band’s best work.

Additionally, this marks the 15th year anniversary of their debut album, Ecliptica. To commemorate this event, the band returned to the studio to re-record the album, at the suggestion of their Japanese label. Apparently, this kind of thing isn’t sacrilege over there, and seeing that only two of the original outfit are currently in the band nowadays, they warmed to the idea with the intent to update and polish, not to rewrite or recreate the original magic. Of course, to some people this entire concept of re-recording a classic is anathema, and for good reason too. It is rarely an improvement, and often comes off a little desperate when bands try to rekindle the good ol’ days. But I don’t feel like this is what’s going on here…sure I know financial interests play a large role in this kind of project, but honestly, if the album comes off well, then more power to ’em.

So, does it come off well? The answer is a hearty yes. Production values are akin to Pariah’s Child, so these songs receive a modernization. Of course, the content is classic Sonata Arctica and the band sounds great. Surely the purists will scoff, but feh I say! Feh!