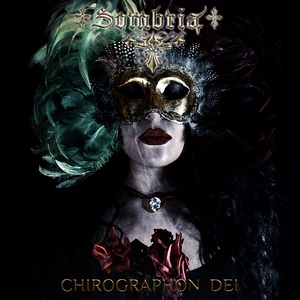 Sombria is a new act in the gothic metal scene, with Chirographon Dei being the band’s first offering to the public. Spearheaded by vocalist Valentina Devin and guitarist Raven Seven, who have worked with a number of high profile acts in the past, the band incorporates melancholic darkness into their music. They have the dreary aspects down with this debut, but some things should be left on the cutting room floor.

Sombria’s biggest strength is their ability to draw in a feeling of graceful darkness. There’s a slightly eerie and macabre sound to the band, without it feeling too dark, and the gothic atmosphere is dripping with gloomy qualities. A cinematic scope also gives the band a larger than life sound, particularly on a track like “The Soul’s Manuscript,” where some lumbering and almost doomy riffs offer up a base for the elegant keys and Valentina’s vocals to contrast with. There’s a haunting feeling to much of the album, with a song like “Penitence” really going all in on that notion. But the one issue the band faces is that with this dreary gothic/doom flavor, there’s not a ton of differentiation to work off of. The sound works, but with songs that frequently hit between 7-9 minutes and an overall hour-long album length, it starts to feel a bit one-note. What they do is good, but for the lengths, there needs to be some more variety to it in order to capture the listener’s attention for that span of time. There does need to be some of that lingering in order to generate the necessary mood and atmosphere, but too often the band lingers in it for too long and it diminishes the emotional return.

There’s a solid groundwork being laid into gothic soundscapes on Chirographon Dei, but the band needs to expand their repertoire to really make their mark. Sombria has definite potential if they can capture that essence here and bring in more diversity to their sound.