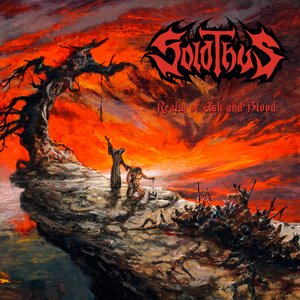 A warrior stands apart from a massive pile of corpses – likely slain foes – while death beckons him to meet the noose. Who else is there to vanquish but the self after having conquered all else? Perhaps a play on the title, Realm of Ash and Blood is a shambling, desolate endeavor that, when considering the death-doom paradigm, leans far more often into the doom, often with glacially paced applications. It’s also a tightly woven, almost breezy listen that doesn’t overstay its welcome. Behold the ruins.

Being unfamiliar with the band but a sucker for gnarly cover art, I approached Realm of Ash and Blood with minimal information beyond knowing the band hails from Finland – itself with a baked-in expectation for the weird. Weird, however, is not quite what is on hand. “The Gallows’ Promise” is paced like funeral doom, a fall into a cavernous void. When the band does lean into the “death” side of the sound on “The Watcher”, it’s to take on a steamroller quality not dissimilar from the many other stellar bands on 20 Buck Spin’s roster (endless weeping for the ghost of Slugathor).

“Last Breath” is a gentle, if melancholy palette cleanser that is perfectly situated in the album’s center – an excellent application of sequencing. “Below Black Waters” is a lesson in the slow build, perhaps an attempt to approximate drowning in literal sludge, and to that end it is very effective. Closer “A Rain of Ash” serves as a multi-layered cathartic sendoff to the album as a whole and is the only song to exceed ten minutes. At 42 minutes, Realm of Ash and Blood is a lean burning experience, no small joy when considering how exhausting the cavernous sound can be.

2020 has been an unusual year and this album released during a peak in that unusualness. It’s as strangely fitting as one could hope for, including – perhaps most distressingly – no happy endings. What Solothus doesn’t bring in happiness they instead bring in satisfaction through unrelenting and devastating riff delivery. In this unusual time, that’ll do.