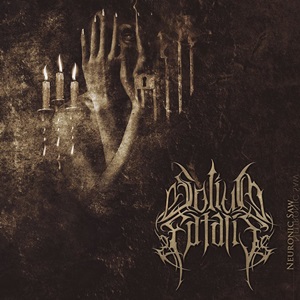 Establishing themselves worldwide since 2012 through a debut self-titled album and the follow up The Undying Season (the latter gaining approval from our esteemed co-editor last year), it’s always exciting to hear what can be in store for our favorite burgeoning artists. Solium Fatalis is another outlet of creativity for vocalist/bassist Jeff DeMarco, also a part of NH melodic death metal group Excrecor. This time around, he’s surrounded himself with ex-Suffocation’s Kevin Talley on session drums, plus permanent guitarists Jim Gregory and Ryan Beevers – elevating the third record Neuronic Saw into an active entity especially on the live front.

These nine tracks in the main have a lot of European-oriented finesse plus North American death ferocity – the drumming bludgeoning while the guitars rip and tear through the aural landscape. Even when the band chose to be more methodical and precise as happens on “Fractured Divinity”, there’s this wall of crushing Hypocrisy-like riff maneuvers that along with a blitzkrieg, shredding lead break that just sweeps even the more casual fan of the genre into hair whipping, neck straining frenzy. Jeff’s delivery has that discernible clarity while summoning the growls and depths of darkness necessary to promote more chill bumps, as “Myopic” and the shape-shifting “The Carrion Feast” represent two superior larynx lacerating performances. The frantic sections of “Contagion (Director’s Cut)” (a 2016 edition from the previous album) and “Hymn to the Infected” conjure up the best elements of early Morbid Angel and Immolation as well as what made Carcass so great – the ability to still inject the right hooks while still being devastating in a traditional death metal sense. Continuing the strong mixing/mastering relationship with Cryptopsy guitarist Christian Donaldson ensures Solium Fatalis can stand shoulder to shoulder against the best in their sub-genre.

Understanding the genre at hand and executing album to album may be a more difficult see-saw balance to create. Solium Fatalis succeeds on both fronts, as Neuronic Saw takes me back to the early and mid-1990’s when the death genre wasn’t always about being the most technically savvy musical group to come down the pike. It’s all about the grouping of riffs, atmosphere, tempos, and vocals into this maelstrom of sonic brutality that can’t be denied. Another treat for the marketplace.