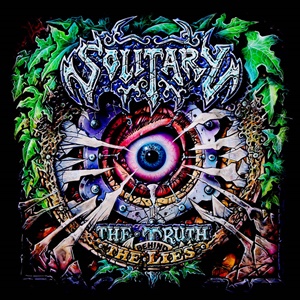 Originating in the mid 1990’s when thrash was not necessarily the hot commodity in the underground, UK band Solitary have been slugging through the scene, releasing albums, EP’s, and a live record as well as playing shows with acts like Lawnmower Deth and Xentrix. Signing with Metalville, this fourth studio album The Truth Behind the Lies showcases a quartet unwavering in commitment to the cause – proving that this style means the world to these musicians, combining a mix of domestic and abroad influences into eight tracks of straightforward groove-oriented material.

Older acts understand that you can’t remain stuck in one gear – be it relentless and crushing or mid-tempo and mosh-oriented. Because of this, the guitars, bass, and drum interplay can move from triplet-like chugging and gallops with thunderous support for opener “I Will Not Tolerate” to the more subdued, mid-tempo militant stop/start aspects and lower-tuned guitars for the follow up “The Dark…The Resilient”. You can imagine the incessant head bobbing and hair windmills to the vicious attacking nature of “Catharsis” – combining the early spirit of Xentrix with the venomous picking and spirit of Testament, some of the transitions slightly progressive while the lead break combines neoclassical fret burning and dive bomb tactics. Guitarist Richard Sherrington handles the vocals, and his menacing, lower spitfire nature with hoarse-oriented screams gives the material a bit more spunk, making a song like “DTR (Dishonour True Reality)” a rollercoaster ride over its 6:16 timeframe, interlocking crossover aspects into classic early Chuck Billy-like delivery. Teaming with seasoned producer Simon Eferney (Napalm Death, Paradise Lost) Solitary gains the benefit of great tones and the right bite to process all the songs and dig deeper through repeated exposure to certain dynamic nuances.

The Truth Behind the Lies won’t necessarily vault Solitary into the upper ranks of the genre – but they appear content to just churn out what they know and love about thrash, and there will be plenty of people that still appreciate a meat and potatoes effort like this.