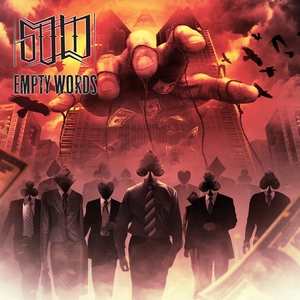 Estonian act SOLD carries with them some lofty expectations. Mostly due to the fact that this scribe frequently engages in bands that manage to blur the melodic death/modern metal line and looks for things to provide an ample twist. Something that SOLD does to a tee with their first EP, Empty Words. While it’s going to feel somewhat familiar, they’ve already captured the essence of the genre on their first shot and attempted to spread their own wings.

Avoiding the growing trap with these types of acts to use an overabundance of synth to reel in fans, SOLD operates more along the lines of say, Deadlock than Amaranthe. Empty Words comes across as undeniably heavy, even with the injections of more modern elements. They wisely focus on riffage as one of their weapons, rather than solely relying on the clean/harsh vocals to capture all of the attention. “I Feel No Pain” offers plenty of guitar heroics, including some inspiring leadwork alongside a healthy and headbangable bottom end. The opening title track is as powerful an introduction as needed, offering up some galloping riffs and thrashy tempos in addition to some catchy melodies that are effectively placed. With the clean female/harsh male vocals, there’s bound to be some ‘beauty and the beast’ comparisons in this element, but it is also notable that the band doesn’t hold themselves to those roles. Sure, the title track has a rather catchy chorus but cleans are also used in some more driving and energetic moments and the harsh layering helps to keep things out of clichéd territory. The last track, “A Man-Made Machine” is perhaps the band’s strongest cut, with a bevy of standout moments, from a killer solo to the EP’s most anthemic chorus, to energetic thrashing at the song’s onset.

Empty Words is a remarkably strong debut EP from what should be a promising act within the melodeath/modern metal movement. It deftly manages a good amount of heaviness with strong melodies that stand out without putting a damper on the energy level. Add in a more guitar-oriented focus, and you’ve got an all-around winner.