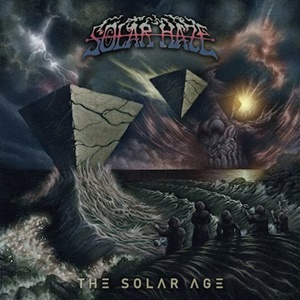 Southern California act Solar Haze lives for a heavy sound that straddles the fence of stoner rock and heavy metal for The Solar Age. The three-piece execute material bringing a host of older influences to mind – cut from a cloth of Black Sabbath, Thin Lizzy, and older Iron Maiden – put through an American-ized context with emotions and experiences that come along with that. Delivering a three-song EP can be a teaser to some, but in that short, tidy time frame you’ll find plenty of catchy tracks to digest, while understanding the framework that Solar Haze operate under. Harmonized instrumental interplay, bluesy lead support, and solid rhythm section work that flexes mental muscle as much as provides stable support to keep you entertained – these are the keys whether the arrangement is short and sweet or longer and more epic.

Take the almost nine-minute epic “Terror of the Deep”. Opening from a stoner/doom metal angle, guitarist/bassist Stephen Falla vocally measured in his despair-fueled verses while Cliff Burton-esque effects send shivers, the mid-tempo transition adding heft and intensity to the proceedings while the final minute includes sound effect waves and acoustic guitars that fade into the distance. Meanwhile the title track takes on a bit more of a throwback NWOBHM texture, Ross Cowan and Stephen laying down licks and tricks that make early Sabbath, the Scorpions, and Angel Witch followers bang their heads to oblivion. Even drummer Ryan Michael Falla gets a bit of a quick solo spotlight to rev up “Fortress Will Fall” – his playing energetic and a bit punky in spots to push his compatriots to deliver their best performances, and the vocal melodies compared to another well-established California act Night Demon.

Feel the smoke crossing the room as their in your face approach lingers when the final notes waft in the night sky. Solar Haze hopefully waste no time getting another full-length out there – as The Solar Age leaves this scribe desiring more heaviness soon, if not traversing the touring market witnessing the band on any stage that will have them.