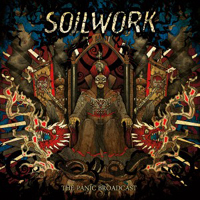 Soilwork doesn’t have to do much to appease people. Really, just load in some quasi-death metal riffs, make the verses brutal, and drop Speed Strid’s silky-smooth clean vocals into the mix and…there you have it, classic Soilwork. People eat this stuff up, and with good reason – the Swedes have long been ahead of the curve (i.e. good cop/bad cop vocals in melodic death metal), and with The Panic Broadcast, the band has effectively circled the wagons.

The return of founding member/guitarist/primary songwriter Peter Wichers is a tremendous shot in the arm, even if the man was responsible for most of the drek that was 2005’s Stabbing the Drama. On The Panic Broadcast, the band re-introduces the brutal aspects of their early sound, going right for the throat on opener “Late For the Kill, Early For the Slaughter.” Here, the octopus-armed Dirk Verbeuren gets to display his talent via an array of blastbeats and rampant double-bass work for maximum, almost startling effect. Not a bad way to start things…

There are a handful of tracks that rank among the best has ever produced, namely “The Thrill” and “King of the Threshold,” both of which combine the flowing melodic tactics of Natural Born Chaos and the brimming with speed template of Chainheart Machine. “The Thrill” is the pick of the litter, though, as Strid dives deep into a memorable sing-a-long chorus that outpaces just about everything else on the album.

Additional album highlights include “Deliverance Is Mine” (check out the solo trade-off), the acoustic guitar-led “Let This River Flow,” and “Epitome,” where Strid solely employees his clean vocals.

Sonically The Panic Broadcast is leaps and bounds ahead of 2007’s poorly-received Sworn to the Great Divide, and since a lot of these songs are better, Soilwork appears to be back on track, just like its 2002 all over again. Not so much a comeback album as it as a rebound effort, The Panic Broadcast is Soilwork’s best showing since Natural Born Chaos. Hopefully they won’t water themselves down again…