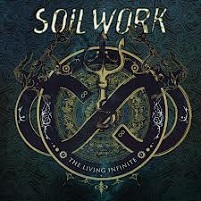 First thoughts about the double-album that is The Living Infinite? The Soilwork of the mid-00’s could never pull something off like this, primarily because they were trying to take shortcuts, shortcuts that came to close to circumventing their role as melodic death metal headliners. There’s no way the band could have spat out two album’s worth of Scandinavian wannabe nu metal, which is exactly what Stabbing the Drama is. The Living Infinite, like its The Panic Broadcast predecessor, is Soilwork still hanging with melody, still messing around with technicality, and for once, taking some chances. (For the record, a double-album is the embodiment of “taking a chance” anyway.)

Another change in the guitar ranks notwithstanding (Peter Wichers is out again, replaced by David Anderson of Night Flight Orchestra), the two discs that comprise of The Living Infinite bolster quite a few magic melody moments such as the shining “This Momentary Bliss” and “Realm of the Wasted.” It’s all done in the confines of the band’s long-copied template of Speed Stride belting out a grizzly bear verse, then turning puppy dog in the chorus. Naturally, saccharine choruses are the main takeaway, as “Tongue,” “Long Live the Misanthrope” and “Drowning with Silence” make due as some of Strid’s better moments.

Stepping aside from simply magnificent album opener “Spectrum of Eternity” (easily the band’s best opener since “Follow the Hollow”), the moves away from the traditional don’t translate as well as the band would have liked. “Memories Confined” never gets into gear, “The Windswept Mercy” is all syrup and too much of it, while the sludgy “Entering Aeons” is a path best not taken. Nevertheless, the Swedes should at least be applauded for not taking the bait and trying to replicate The Panic Broadcast. That would be a total Arch Enemy move.

Initially, we thought the album was too front-loaded and shallow, which is a strange thing to say for a double-album. However, once one takes a deeper dive, then it starts to make sense. The Living Infinite is Soilwork’s boldest move to date; it’s not another watershed moment ala Natural Born Chaos, but it sure beats the piss out of standing in one spot, or trying to latch onto what the Yankees are doing.