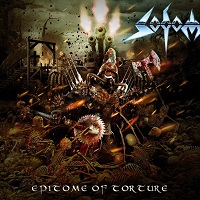 Let’s not get carried away and proclaim Sodom has passed Kreator in the Teutonic thrash arms race, but seriously, Epitome of Torture doesn’t mess around. Maybe it’s the addition of drummer Markus Freiwald to the fold, giving ‘ole Tom Angelripper a kick in the songwriting nads, or Sodom is better than we have given them credit for…regardless of one’s vantage point, Epitome of Torture has more teeth and gall than expected. And the best albums are the ones that always sneak up on ya.

Proceeding with the subtlety of a bull in a china shop, the trio benefit immensely from Angelripper’s vocal choices. He’s always been a bit less animated than Mille Petrozza; not as hateful or as persuasive, yet he has pulled together a string of memorable chorus and vocal machine gunning that is top notch. Case in point, the harmonized (wow!) portions of opener “My Final Bullet,” or the sure-fire chant-along “S.O.D.O.M.” Like, who is not going to want to spell out the letters to this song? Hopefully they make a music video for this tune and place the words at the bottom ala Sesame Street. Sesame Street and Sodom…my oh my.

Let us not look beyond the surging “Into the Skies of War,” or the marvelously-titled “Shoot Today, Kill Tomorrow” either – Sodom have paced their thrash appropriately, proceeding with all meat and some tasteful solos courtesy of Angelripper’s long-time wingman, guitarist Bernemann. It all adds up to an album that could probably hang with the fabled Agent Orange, and more importantly, give the band another lease on life on these shores, where they’re still a distant third behind Kreator and Destruction.