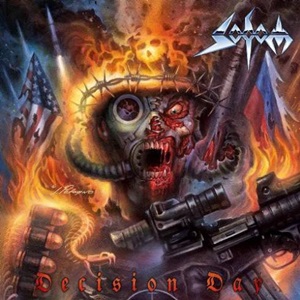 Part of the original 80’s Teutonic thrash triad (Kreator and Destruction complete the pyramid), Sodom plug along much like a tank that makes its presence felt due to presence and overall strength. Limited touring in their career over here probably puts the trio on the backburner for most North Americans, but you can’t deny the tenacity and attack of prime records in the catalog, from Persecution Mania and Agent Orange to the more recent M-16 and In War and Pieces. Now we reach Decision Day, the 14th studio album that keeps its eyes on the prize and pedal to the metal, delivering 11 more tracks of non-compromising heads down thrash the way Sodom-ites expect.

Knowledge is power, and the fact that bassist/vocalist Tom Angelripper stays within his strengths makes “In Retribution” and “Rolling Thunder” a proper one-two salvo to start the record – the steady acidic roar and occasional whispered verses in the latter reverberating in the aural landscape to set up the riffing and tempos as another dynamic charge. Diversity remains key to maintaining interest even in thrash, because everything cannot be stuck in a speed whir and expect to become embedded in the brain – so the more tribal, churning sections of the title cut and “Blood Lions” gain greatest opportunities for audience participation or propulsive pit action.

Guitarist Bernemann handles the host of riff transitions and lead break duties with the same vigor as his start almost 20 years ago with the group – setting up razor sharp rhythms through atmospheric build ups for highlight “Who Is God?” while being a little darker and tantalizing through specific note choices on the closer “Refused to Die”. It’s also important to possess the right drummer in Makka who can go full bore to steady groove passages at a second’s notice, “Caligula” perfectly showcasing his double kick/snare abilities as well as some mid-tempo swings that make metalheads go mad. And how can you go wrong with an ominous title like “Vaginal Born Evil” to know that Sodom aren’t treading on the rainbows, flowers, puppies, and kittens parade lyrically.

Much like the metal genre we love 40-plus years in, thrash has been a part of the scene now for over 30 of them – and Decision Day illustrates another compelling reason of the movement’s vitality and impact through numbers.