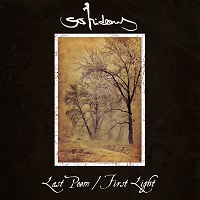 Though running a bit behind on this one, the impact is no less enormous. Though clipping off (for the better) half of the band name and refining their sound since their last release, So Hideous has produced a painfully brief amalgamation of old-Emperor essence (look no further than the blistering verses of opener “Rising”) and bleak-yet-rich modern-day sensibilities to forge one of the best dark horse black metal releases of the year.

The aforementioned “Rising” is an immediate statement, the ‘hardcore’/black mashup that the band conjures leaning much more toward the black, only the occasional pummeling that results giving rise to the other half of the band’s inspirations (and no breakdowns, mind you). Symphonic elements are everywhere and run rampant through every song, be they in windrow-dressing ways (see above) or as an outright centerpiece, as in initial single and album standout “My Light.”

Many bands have attempted to blaze the trail So Hideous walks here, this merging of symphonic black with…I dunno, while it’s listed as hardcore in the materials, there’s something more to the harsher sections than that. Spread across the album between the lashes of exhausting brutality are these often incredibly moving moments of melancholy, most lovingly highlighted by the closing minute or so of “Stabat Mater.”  These moments and the distinct lack of reliance on familiar structures is largely what sets Last Poem/First Light apart from those who have gone before and, in large part, a majority of their peers across the metal spectrum this year. There’s a penchant for the melodramatic in some of the high points, but goddamn does it work!

It’s a shame that this release is so deep in the indie closet for as we come into the end of the year, there have been few releases that have showcase the kind of love and care as the 32 minutes of Last Poem/First Light. Find it, listen to it, love it, embrace it.

So Hideous on Bandcamp