So Be It – The Graves of Empires (Self-Released) 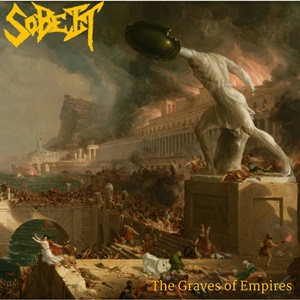 When facing a lack of talent or capable musicians to execute your vision, there’s always the option of going it alone. Such is the case for So Be It, a thrash-based act with death inflections from the mind and body of Tyler McCarthy. Active since 2007, three previous demos have been released as Tyler has moved from Michigan to Connecticut and currently resides in Silver Springs, Maryland. The Graves of Empires is the fourth release and first since 2010’s Let the End Begin – a seven-song effort that contains primal energy of an underground, propulsive nature that showcase his wide array of influences.

The thrash side comes about through specific picking and riffing combinations that channel Slayer at their late 80’s peak along with a side of Metallica or Dark Angel – check out “Between the Fangs of the Beast” where Tyler combines a flurry of evil trills with his raspy, mid-range roar while the instrumental transition engages in classic, pit-moving circular grooves. The guitar work, especially in terms of lead proficiency, stands up well to his heroes – one suspects neoclassical metal axe players and Chuck Schuldiner rate favorably in his playbook when listening to the opening strains of “Other Half” or the powerful “Sword of God”. Another pleasing aspect to this recording is the fact that So Be It doesn’t rely on one specific template for executing their material – sometimes it’s okay to let a slower, exotic-oriented atmosphere coax the listener before the regular thrash proceedings kick into gear, as the closing title cut illustrates. You do yearn for a human drummer in certain aspects where the tempos wouldn’t be so mechanized – and if there is another slight misstep to these ears, it’s when Tyler tries too hard to be ‘evil’ in the growl department (“Panopticon”) where his delivery seems more well suited in the mid-range raspy/venomous roar that John Kevill of Warbringer executes to perfection.

Going in knowing that The Graves of Empires is a one-man show (including bare bones, demo-level production values) and there is a place for So Be It in the scene.