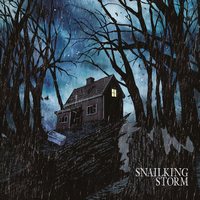 If you ever wanted to know what the sound/process of getting hit by a truck somewhere in rural Sweden sounds like, Storm is probably a pretty good embodiment. Surprisingly agile for a debut doom album (sans Southern stylings, no less), unexpected twists and impressive indulgences in the quiet abound across the lengthy whole. As a measure of the current and an means of expectation for future growth, Storm is kinda awesome.

Five tracks and a bit under an hour in length, all but one of the works here are relative long players, coming near or stretching beyond the ten minute mark and meaning there’s a lot of room for the songs to build, lumber about, collapse, then build some more. Whether on opener “To Wonder” or follow-up “Premonitions”, the crescendos come heavy and with aplomb. Not post-metal styled crescendos, mind you, as the quiet-and beyond buildup that occurs in the backhalf of the later is a doomy kind of cathartic throughout. Reflections of the gnawing dark permeate across the dreary opening half of closer “Void”, eventually giving way to colossal walls and no particular hope of reprieve from the throws of isolationist misery.

Special note must be paid to the album super-cut and longest work “Requiem” that, despite its nigh 17 minute run time, never particularly loses its way or meanders outside a course of focus, no small achievement for any group. Expectations were non-existent going into Storm and, for all I knew with a name like Snailking, anything was possible. Surprises are indeed surprising, as the obvious are apt to say and never is that more fitting than in describing the many robust cascades in Storm. Embrace the feel of being crushed into the unknown somewhere outside Jönköping.