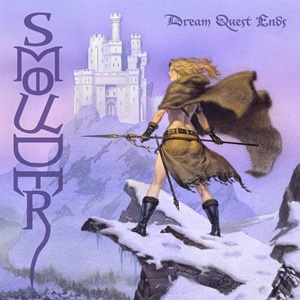 In preparation for many prime festival appearances across Europe this spring, Smoulder release a new six-song EP Dream Quest Ends that consists of two new songs, a Manilla Road cover, and three cuts from the debut 2018 demo The Sword Woman. Already establishing their epic heavy/doom metal sound to legions right away through last year’s Times of Obscene Evil and Wild Daring full-length, it’s more about continuing the plant the aural footprint in the right way. These musicians are equally passionate as fans of the genre beyond merely playing it – and you can hear and feel that magnificence from first note to last.

Choosing to look at the new material first, the title track contains mammoth riffs and titanic melodies, the rhythm section of bassist Adam Blake and drummer Kevin Hester setting the doom foundation as guitarists Collin Wolf and Shon Vincent crush through dual rhythms and complementary clean nuances during the calmer sections (including a male/female vocal duet component) as well as slower lead mechanics that rival Brocas Helm and Iron Maiden. Second song “Warrior Witch of Hell” has more of a Candlemass/Solitude Aeturnus-like presence, Sarah Ann forceful as her measured words and sustained note holdouts send shivers to the spine and the tribal-like doom crawl around the 2:57-3:21 mark sure to bring about some slow headbanging when aired live. “Cage of Mirrors” is the Manilla Road track Smoulder cover in honor of Mark ‘the Shark’ Shelton who passed away in July 2018 following their appearance at Headbangers Open Air festival in Germany. Released on their 1982 album Metal, the almost nine-minute epic contains all the progressive/epic twists and turns in transitions, tempo changes, quiet to heavy harmonies you expect from the cult act – and the band pay proper reverence and homage to this track.

The three demo tracks obviously have a more primitive/raw quality than the other three cuts but give the listener a bit of a history lesson on the band from its inception. Glorious times for this specific sub-genre – Smoulder giving the listeners hopefully a long run of material to treasure in the coming years. 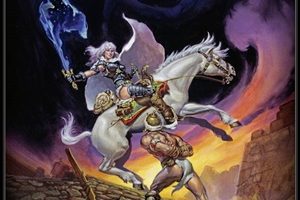