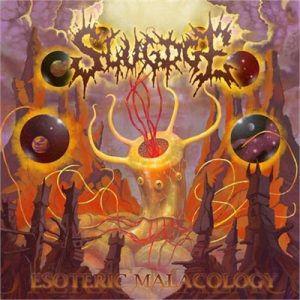 With some DIY releases propelling the band into cult-like status on Bandcamp and social media, Slugdge have made the leap into label-backed territory with their fourth mollusk-praising release. The first release in three years, those familiar with the group know full-well how complicated it can be to describe their music. But Esoteric Malacology shines in its ability to provide a thorough blend of varied sonic influences and craft them into a slimy, cohesive experience.

The most interesting part of Slugdge’s sound is how they can take parts from varied metal subgenres and make it into something that still flows and feels completely natural. There are some major jumps in sound as you move through the album, but it all works to keep everything feeling fresh, which is particularly important for a nearly hour long trek with 6-8 minute tracks. You can have some technically wowing death metal with all of the frenetic trimmings like “Slave Goo World,” but next to it have a more atmospheric and progressive cut like “The Spectral Burrows” that is full of soaring clean vocals and gripping melodies. Dabbling into more psychedelic and doomy territory isn’t off the table either, with “Salt Thrower” seeing a more esoteric approach before a more frantic second half sets in. At the bottom of all of this diversity are the riffs. Slugdge have a real knack for making fantastically compelling riffs, no matter the direction they are traveling in. “War Squids” and “Crop Killer” waste zero time in exploiting this ability at the start of the album. You will hear one riff that sticks with you, it will end, and another one will quickly take its place. The most remarkable quality is how this quality stays with the act over the course of the entire release.

Esoteric Malacology is just the album that Slugdge needed to make at this point. It takes everything that they’ve done well in the past and shows them fully capable of mastering it all. With a label behind them, it should provide just the push to get their name out to a larger portion of the extreme metal community, as well as open the doors for an even more glorious and slug-filled future.