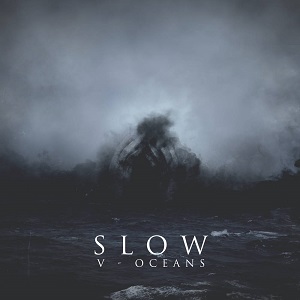 Obviously, quite the self-descriptor; “Slow” is the name of a Belgian funeral doom band. The next best thing would be to actually call themselves “Doom Funeral” or something of that ilk. Apparently, the name stands for “Silence Lives Out/Over Whirlpool.” Okay, then. The one-man project of Déhà (real name: Olmo Lipani), Slow got its start in 2007 and has been prolific ever since, popping out an album on a near-annual basis. V – Oceans was originally released by GS Productions in 2017 but has since been snapped up by Code666 for a proper release in 2018.

If you’re a funeral doom band, you’re essentially tethered to the sound. Any sort of wandering away from its core tenants, means, well, you’re not a funeral doom band. Therefore, Slow’s constant adherence to the sound is a double-edged sword. While opening number “Aurore” is steeped in melody at the start, it gradually gets mucked up by layers upon layers of synths and lurching guitars. The pattern repeats throughout, with Déhà keeping the tempos at a snail’s pace while ushering some quasi-despondent moments on “Déluge” and “Mort,” neither of which resonate in the end. V – Oceans really just ends up cutting and pasting all over itself, if you could imagine.

Déhà does his best to squeeze every last bit from the funeral doom tube, whether it be by extending the songs or instrumentally just devouring the place. In the end, he gets largely the same results as other bands of this ilk. You’ll only get so far playing funeral doom of this variety, then the lurch feels like a crawl and a crawl feels like going backward. Slow is, er, slowly getting there…