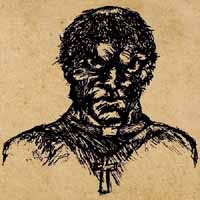 Must be a lonely spot for Slough Feg considering, you know, they’re practically one of the few earnest, instantly identifiable “true” metal bands going. Heck, even calling them “true metal” is a stretch nowadays, with Mike Scalzi and the boys often dipping right into straight-rock territory that picks right up where Thin Lizzy left off. With The Animal Spirits (the band’s eighth album), it’s more of the same free-wheeling, organic jams that for lack of a better term, just rock.

Scalzi remains at the fore of the band’s sound, and his vocal-work (which could not be more instantly identifiable) is brave and brash, spouting off about a plethora topics this time out including the Catholic Church (“Trick the Vicar”) and vampires (“Lyncanthropic Fantasies”). He takes charge of these songs, maybe moreso than on previous efforts, and it works like a charm, even allowing for a guest vocalist when Brocas Helm singer Bob Wright steps in on “Tactical Air-War.”

Lots of cool guitar work going down from Scalzi and fellow axe-man Angelo Trigali on “Materia Prima” and album standout “Free Mark Barbarian,” which could be Slough Feg’s best song since “Hiberno Latin-Invasion” off 2005’s breakout Atavism. What makes most of this work so effectively is how decidedly simple most of the riffs and melodies are, yet they’re performed with such a degree of earnest, that it’s one of those albums that gets embedded in one’s head…and is in no hurry to leave.

When stacking this up next to the band’s prior releases (which includes the time when they were “The Lord Weird Slough Feg”), The Animal Spirits ends up somewhere in the Top 3. It certainly catapults over last year’s Ape Uprising, and could easily hold its own against the aforementioned Atavism andTraveller, an album that has long been considered the band’s signature work. Don’t ever sleep on these guys – Slough Feg should be an institution.