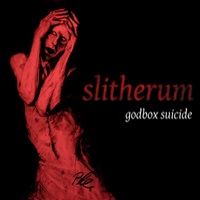 Slitherum is a Greek trio that engages in a form of European gothic doom metal more prevalent in the middle of the 1990’s than today: exploring elements of gothic and art rock in addition to a lot of the heavyweights in the genre for their debut full-length, the intriguingly titled Godbox Suicide. Early on the outdoor loops, dynamics, and haunting atmospheric moans for “Lechona” give way to the follow up “Feet” – a song that features dual clean/extreme vocals, a decisive heavy guitar hook for the verses while the chorus is slightly more commercial and subdued. A lot of the sweeping atmosphere gives off a Rotting Christ feel, while the drumming has a tribal groove that conveys a bit of Sepultura circa Roots era – the ‘na-na’ background parts equally hypnotic and infectious.

At times there are surprises in terms of the guitar play of Giannis Kalamatas – employing loads of neo-classical guitar sweeps, U2 eighth-doted notes and shred elements during the Paradise Lost-like title cut that ignite a power energy into an already interesting mid-tempo gothic metal arrangement. Nick Marinos as a vocalist has that dual clean/extreme delivery switch up to extend dynamic possibilities for Sliterum- morose and melancholic for the slower, more atmospheric passages while heightening tension through caustic, blackened-oriented screams in spots. Images of Pete Steele, Nick Holmes, and Sakis Tolis all come up when taking in highlights like “Mother” and the aforementioned “Feet”. The final two tracks showcase more of a Sisters of Mercy/ Fields of the Nephilim atmosphere, illustrating a wide reaching array of emotions that these three musicians choose to channel from track to track.

There are times when the right album appears at the right time to reawaken a love for the early days of a particular movement in music. Godbox Suicide does just that for this listener- and could for a multitude of others who miss a lot of the melancholy bliss of gothic rock/metal two decades previous.