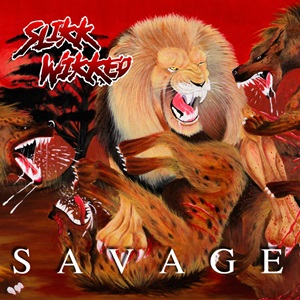 Initially thrown askew because of the more ‘glam’ oriented band name, Slikk Wikked hails from Tampa, FL and sits in more of a traditional meets thrash pocket stylistically. Savage as their debut album comes hot on the heels of a previous Black Wind of Death EP released last year, and the band appear focused as well as conscious of the fact that not many younger groups choose to write songs versus being the most brutal, fastest, or technically brilliant musicians on the planet.

What does that mean over the course of a twelve song record (14 tracks in totality with the brief “Equinox” and “Solstice” instrumental bookends)? The tempos and riffing overall have a definite old school influence sheen, guitarists Zakk Thrash and Kyle Smith conscious of bands like Twisted Sister and Iron Maiden for sure on a mid-tempo anthem like “In My Blood” where the main riff could be a clear derivative of “Two Minutes to Midnight”. When things go a little beefier and heavier, the sneering Zakk melodies meld seamlessly against the galloping bass from Nasty Pat and pounding, Handsome Kris drums on “Dead in My Eyes”, where it feels like Metallica careens against a lot of the finesse of current Havok. Kyle prefers to inject a number of wah-wah techniques into his lead breaks, right out of the gate for the mid-tempo stomper “Use Your Head”, while some conscious twin melodic employment occurs on “Until the End” – possibly the most commercial arrangement of the record due to its simpler riff hook which matches up to the mid-range vocal notes.

The production has a natural appeal – clear while going against the brickwall/loudness grain, and the animal adorned cover art matches brilliantly the volleys between classic metal and a more controlled form of thrash. Sure there are times where I wish Zakk would tear lose a little in the rhythmic nature to his vocals (occasionally bordering on tedious during the verses of “Don’t Push Your Luck”), but overall Slikk Wikked achieves an overall theme of a quartet intent on pushing the song first over everything else outlook, and does a very commendable job on Savages. Strap on your favorite axe, crank this to ten – devil’s horns fly free.