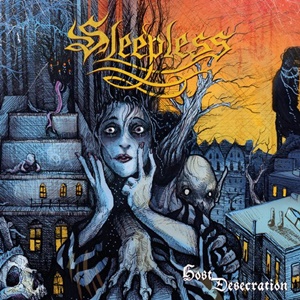 You don’t often hear a trio of musicians carving out a semi-technical form of traditional metal, but that’s what we have here in Portland, Oregon act Sleepless. Two of the members have seasoning in long-running death/thrash unit Dead Conspiracy, yet this album Host Desecration veers into influences rarely explored in the current scene – a pocket of time during the late 80’s to early/mid-90’s where exploration and innovation seemed as key as being aggressive or catchy. When taking in these nine tracks, listeners can expect subtle shifts off main chord/riff parts that branch into progressive, off-time landscapes, however never too obtuse or twisted from maintaining coherent, cohesive hooks and enthralling melodies.

Holding down bass guitar and all rhythm guitar duties, Eric Sexton-Dorsett can lay down some solid traditional doom movements one moment, then rip into technical thrash/power parts without losing momentum – as the Anacrusis/Watchtower meets Nevermore/Solitude Aeturnus angles come full force during “The King Who’s Not There” as well as shape shifting title cut. Kevin Hahn tackles lead guitars as a versatile axe slinger, while displaying multi-octave vocal prowess and tremendous emotional resonance in lower to high registers that mirrors the work of Rob Lowe or Alan Tecchio during superior cuts like “Diviner of Truth” and the semi-groove/power driven “Mushroom Clouds at Night”. Although most of the material gets in and gets out in a remarkably economical three and a half to five-minute windows, closer “The Man Who Could Not Sleep” at over 6:23 introduces some subtle vocal effects plus longer instrumental sequences where progressive chops, abrasive cues, and the tempo changes allow for spirited ebbs and flows in the arrangement – even the little jazzy/funky sequence that works. Self-producing the record also makes sense, as the tones and live nature to the sound lends itself well to these tracks making a presence through whatever preferred listening device you use.

Embracing a no-rules template, Sleepless takes this scribe back to 1988-1994 through Host Desecration – experimenting in numerous metal influences while packaging together the material in digestible ways. Niche for appeal, though lovers of this style know when quality shines – and that’s apparent on first (and successive) passes.