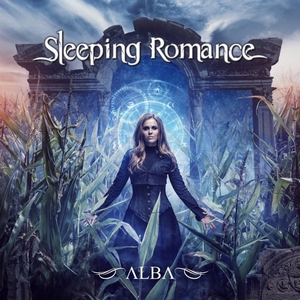 After taking off with 2013’s Enlighten, Italy’s Sleeping Romance has joined up with Napalm Records for their second effort, Alba. But in today’s landscape of symphonic, female-fronted bands, does Sleeping Romance have enough of an edge or identity to make themselves stand out? The answer, in listening to Alba, is a definite yes.

Merging a genuine orchestral/operatic vibe (just check out the grandiose “Overture” and “Underture,” which begin and end the album in poignancy), with some enjoyably heavy guitars, Sleeping Romance carve out a space for themselves. While some may argue about the familiarity of it all, the band does keep its charm intact. The first single, “Where the Light is Bleeding,” makes it clear that the band’s intentions lie in contrasting some lush orchestration – full of the necessary bombast and power – with some riffing that can occasionally border on melodeath. Take the standout cut, “Lost in My Eyes,” where an energetic, Insomnium-esque guitar melody soars through the speakers alongside some great orchestrations in the chorus, and instead of battling for control, the two sides instead blend quite nicely. Guitar-centered tracks like this, and later “Everything Behind,” give Sleeping Romance more room to stand their ground in a genre that sometimes appeals more in the synth end than with guitar heroism. The title track seems to nail the balance between intense riffing and flowing classical strings, providing another of the album’s highlights.

Of course, vocalist Federica Lanna deserves some credit as well. She possesses some operatic power (check out the fantastic chorus of “Touch the Sun”), but doesn’t overdo things. There is an elegance to her voice, particularly in some of the softer moments of “Forgiveness” and the gentle “Across the Sea.” Lastly, they keep the reins held in length-wise as well, focusing on mostly 4-6 minute songs that get the point across instead of bloated 7-10 minute “epic” tracks that lose steam halfway through.

Those that enjoy the power of heavier symphonic acts like Epica and Xandria will find Sleeping Romance to be worth checking out. Alba does it’s best to differentiate itself from the pack when it can, and finds itself with some excellent balance between classical/orchestral beauty and solid metallic riffing.