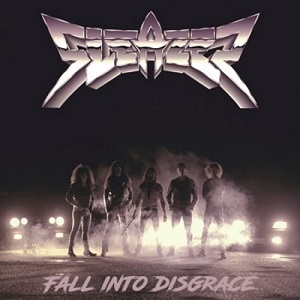 Forming in 2011 and honing their songwriting chops while performing live locally across Italy, it’s natural that Sleazer would get comfortable in certain styles of metal as they whittle cover tracks out and push originals in. After a self-produced Heroes of Disgrace demo in the fall of 2014, more live exposure over the subsequent two years and breaking in a new drummer result in the follow up full-length, Fall into Disgrace (will disgrace be a running Sleazer theme long-term?). These 9 songs in the main (eschewing the shorter “A Falling Overture” intro set up) prove sing-a-long power/traditional metal with speed and glam anthem accents is still alive and kicking to ensure maximum headbanging, fist pumping good times.

It’s hard not to notice the upper screams and falsetto wails emanating from Andrea Vecchiotti on his first appearance for “Heroes of Disgrace” – the paint peeling variety that draws comparison to Skull Fist’s Zach Slaughter. When choosing to be in a more controlled mid-range stratosphere, he conveys this Hansi Kürsch meets Alexx Stahl (Roxxcalibur, Bonfire) passion to his phrasing and melodies, working very well for straightforward bangers such as “Straight on Your Way” and “Fall Again”. Musically Sleazer favor a twin-guitar rhythm and harmony-oriented approach, the tempos sometimes speedy, and the choruses easing things off for audience supported activities. It’s obvious early 1990’s Blind Guardian, Judas Priest, Running Wild, and maybe some of the late 80’s American offshoots such as Savage Grace or Savatage appear to be on the idea charts when taking in the chord progressions, fiery lead tradeoffs, and thunderous transitions for “Legion of the Damned” and “Sabbath Lord”. The hair-side of syncopation and streamlined hooks/choruses best exemplifies “King of Nothing”, an effort worthy of 80’s Dokken/Kiss legions.

Probably niche in appeal, Sleazer will gain a fervent (if cult) following because of the speed/power combinations against classic melodies and group background chants worthy of crowd participation to augment the energy. Can’t go wrong with that band posed cover art and band logo either – Fall into Disgrace possesses enough throwback charm to win over most in the denim and beer brigade.