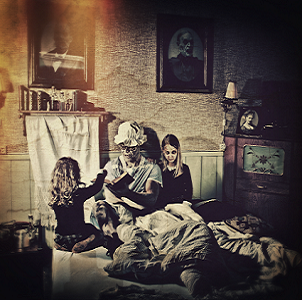 Norwegian black or extreme metal may not whip up the same kind of maelstrom as it did 20 years. That’s what happens when your core bands age, break up or change their sound. What the scene did, however, was leave open the gate for bands of the inhospitable kind, and obviously, this means Slagmaur. Originally formed in 1997 as Norske Synder (that would be “Norwegian Sins”), the band by their formation date would be considered part of the scene’s second wave. But unlike the “weird” bands who have been able to break through, Slagmaur appears to be stuck in the sty of their own making on their third album, Thill Smitts Terror.

Operating without the benefit of a live drummer (the drum machine is poorly disguised), Slagmaur’s indecipherable concoction of caustic black metal and industrial edges never quite finds its place. Take a song like “Werewolf,” for instance. Held together by a frantically-buzzing main guitar riff (would be curious to know what the gents recorded guitars with), “Werewolf” fails to take on any sort of form; it plops around with clunky, programmed drums and a total lack of definition from the vocals. Scattershot, really. The rest of the album is just as malformed, with the 11-minute “Hekseskritt og Djevelritt” and uncomfortable “Hansel unt Gretel” demonstrating that Slagmaur have no interest in song flow or orientation.

Because of its sterling track record, Osmose Productions usually gets the benefit of doubt. With Slagmaur, though, you’d have to wonder why the label is sticking with a band as formless and devoid of dynamics. Guess that’s why they’re signing bands and we’re simply writing about them.