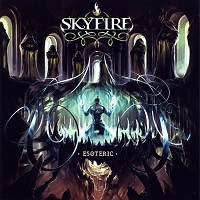 One of the more undervalued melodic death metal bands

, Skyfire have emerged from five-year break with the quite excellent and sturdy Esoteric. Blurring the lines between Bodom melodic death metal and classic melo-death, Skyfire has continued in their tradition of pushing the technical pedigree forward, all the while spewing forth some memorable melodic moments, all of which make Esoteric a clear-cut winner.

Bolstered by the acquisition of shred-meister Johan Reinholdz (Andromeda, ex-Nonexist, a band he’d be wise to resurrect), Skyfire waste no time in jumping back into things with the keyboard-driven title track and melodically-steeped “Rise and Decay,” which is probably the best song

Black metal-tinged atmospheres drape “Darkness Descending” and “Under A Pitch Black Sky,” while futuristic melo-thrash takes hold on “Let the Old World Burn.” The band is at its best, though, when the pace is tempered, as during the introduction of “Misery’s Supremacy,” a song that no doubt benefits from Reinholdz’s considerable six-string skillz.

Due to their somewhat cult profile, Skyfire won’t be the band to get the instant nod when it comes to melodic death metal. However, there’s nary a dud in the band’s catalog, with Esoteric making a strong case for being the band’s finest hour. Totally worthy stuff, recommended indeed.