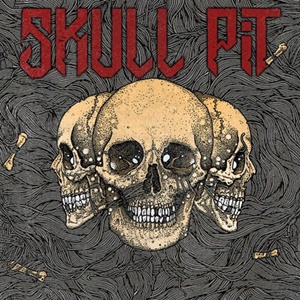 Crossing New York and Tokyo lines for membership, this cross-continental unit Skull Pit has a mainline goal to reclaim their youth when 70’s hard rock and NWOBHM/heavy metal also reigned the underground of the 70’s and early 80’s. Featuring Mem V. Stein from Exumer on vocals and Tatsu Mikami on bass from Church of Misery, these musicians choose to be very specific to the era of music they concentrate on, crafting nine originals plus a Rose Tattoo bonus cut that transport the listener back to those early years of the genre.

Very sharp in capturing the energy and spirit of a time-period that wasn’t afraid to be raw and abrasive while also developing catchy hooks, refrains, and choruses – it’s easy to embrace the Motörhead-like charm of “Soul Raiders” just as easily as the bluesy metallic edges and double bass throwdown during opener “Double Cross”. Mem has that sadistic grit and whiskey-soul delivery to his vocals that certainly would have settled in comfortably during that NWOBHM heyday – hammering home the “War Pigs”/ Sabbath nuances for “Fire Breather” to become the master of fierce ceremonies during “The Line”. There’s no one specific act Skull Pit try to emulate – again it’s about the spirit of the movement to align with simple yet effective riffs, appropriate bluesy/flashy lead breaks for enhancement, then moving on to the next idea. Recording in New York and Japan during the musicians’ breaks away from their regular bands, there’s a live aspect to the material that possesses a non-compromising attitude – a purity that many who love the movement will treasure. Closing with “All the Lessons” – a Rose Tattoo classic that fused bluesy hard rock and punk as a gang-oriented singalong – the slide guitar aspects another charming aspect to conclude the proceedings.

Yes, you’ve heard this style done a zillion times – and it’s not necessarily delivering anything new to the table. But Skull Pit remember what it’s like to plug in, play, and rock. Sometimes that’s all you need to win the people over – and this should make many sweat and throw down many beers in the process.