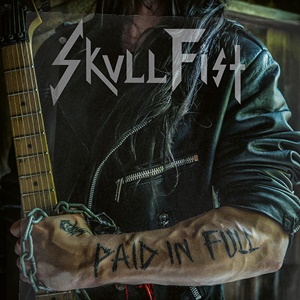 The fourth record Paid in Full for Canadian act Skull Fist is a transitional one – as long-time second guitarist Jonny Nesta stepped away last year after his decade long tenure in the group. Coming off the transitional Way of the Road effort where vocalist/guitarist Zach Schottler admittedly dialed things down fresh off a couple of vocal surgeries, the faithful hordes knew that given a little more healing time, all would be back to normal. And through these eight tracks, you can expect the intertwining of killer licks, catchy melodies, high register vocals, groovy/energetic tempo action, and x factor mechanics that keep the songs etched deep into your soul.

Zach understands and executes versatility in mid-tempo to faster anthem templates – first single “Long Live the Fist” a prime example containing those main circular guitar refrains, a thunderous snare/double kick foundation with proper quick hitting fills, occasional bass lifting, plus the right twin guitar harmonies that make Judas Priest/ Iron Maiden followers grin ear to ear. “Madman” has that mammoth, semi-doom/caveman musical hook and equally captivating lower to mid-range vocal accompaniment that reaches Enforcer-esque heights for the chorus, a track that would have Ronnie James Dio and Cozy Powell beaming. And that’s how the record progresses back and forth between songs that push the accelerator to the floor while injecting the proper riffs and bass parts that cause fists to bang and patrons to shout along with the more controlled outings that dig into earworms most familiar to classic rock or arena-filling artists from the 70’s/80’s lineage. Revisiting two songs from 2010’s Heavier Than Metal EP (“Blackout” and the title track) brings the past to the present, sharp and solid as ever – wasting no time as the record whirls by in an under 35-minute, economical time frame.

Clearly those who delight in the melodic/power dance Skull Fist treasure in a traditional stance know Paid in Full moves more in Chasing the Dream territory than the last outing. Still reigning high for the NWOTHM brigade.