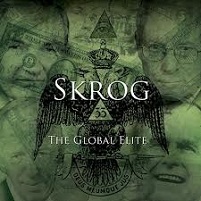 When you bring politics into the world of pure industrial metal, Ministry has to be namedropped, or old greasy, creaky Al will track you down and breathe on you, for the man might have the worst teeth in all of music. Dental hygiene aside (it takes what, two minutes to brush one’s teeth, right?), Ministry’s constant harping on the Republican party throughout the 00’s and parts of Psalm 69 is what essentially made them edgy and hip, laying the tarp for a band like Skorg, the product of main dude Jay Reiter.

On their The Global Elite debut, Reiter breaks it down by saying the album “speaks out the 99%,” perhaps a few months late to talk about the 47% that was Mitt Romney’s death-knell. Therefore, the general and played-out topics of corporate greed and political sway come into play across the album’s eight tracks, with Reiter laying down some seriously heavy and militaristic beats on “The Revelation” and album highlight “End of the World As You Know It.”

Reiter’s production skills should be commended, as The Global Elite sonically, is a frontline assembly (get it?) of thick, pounding dreams and meaty guitars, enabling the two part closer “The Hunter” and “The Hunted” to get their proverbial industrial rocks off. Vocally, he’s all grit, preferring to stay in the standard form-fitting mumbled tone that doesn’t require for any actual singing; it’s more like he’s barking orders to a battalion or shouting at unkempt tent-goers in a major metropolis area.

We probably could have scored The Global Elite higher, for Skrog doesn’t appear to have any chinks in their armor. The album is simply a facsimile of what has already been done, using a theme that by now, has been drowned out by fiscal cliffs and healthcare.