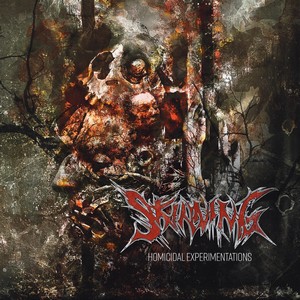 Do you like death metal at its fastest and most brutal? Skinning have just the thing if you do. The Portuguese band’s third full-length is nothing if not a real ripper of an album. The type of frantic release that leaves nothing but fury in its wake.

In the tradition of bands like Krisiun, Vader, or Hate Eternal, Skinning deliver death metal at a furious and exhilarating pace. As one could guess, it’s the type of material that’s just caked with blastbeats and dizzying riffs and it does everything in its power to keep that blitzkrieg momentum running from start to finish. But even in spite of its seemingly one track mind for speed, the riffing itself keeps an edge to it that stays enjoyable. Slight downgrades in speed from time to time give the melodies a slight opportunity to shine, and squeeze in an occasional groove as well (see “Blood Will be Dropped”). All without losing track of providing a bulldozing speed rush, mind you. Due to the short length at a brisk 30-minutes and 3-4 minute tracks, it doesn’t overstay its welcome either. The band has a clear acknowledgement of the strengths and weaknesses of the approach, and make sure the positives are augmented. Did we mention that you can even dig through and find some audible bass here too (see “Wrong Path”)? A solid boost that keeps things heavy, and a bit more memorable that you might think to give it credit for.

Sure, it’s nothing really new that Skinning brings to the table, but the possess a deep understanding of how death metal is supposed to operate. Homicidal Experimentations is completely unrelenting in tone, but it never grows stale or feels one-dimensional. A considerable plus compared to many who are dishing out this type of musical annihilation.