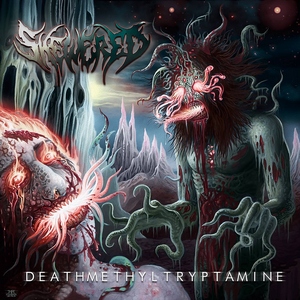 Props given here for the album title in terms of its creativity – one can only imagine the denizens of the metal world having fun saying “Deathmethyltryptamine.” Unfortunately, outside of the clever album title, the second full-length from Ireland’s Skewered is not likely to be recalled for ingenuity. With the band name and album art, you can make a good guess about what Skewered are all about pretty quickly.

Skewered take a run at brutal death metal in all of its glory, but ultimately nothing really stands in the band’s favor. That’s not to say that the band is incompetent, and in fact far from it – they do know how to write material that stands toe and toe with their peers, it just fails to stand out from them. Deathmethyltryptamine is full of energetic riffs, vicious roars, thick grooves, and the obligatory gory lyrics (“Organ Donor Kebab,” “Red Knob Warts”). In fact, there’s even some melodies that the band attempts to employ to keep it more interesting (“Viscous Mucus”) but sadly, despite the attempt, nothing really sticks even after a few listens. In the all-important lesson of trying to keep things brutal and energetic, Skewered fall victim to the tireless trope of being a blur of death metal riffing that ends up feeling repetitive and having 12 variants of the same song.

Deathmethyltrypamine comes off as a competent slab of brutal death metal, but is ultimately indistinguishable from their peers. Skewered seem to have all of the right pieces, but it’s still a matter of knowing how to put the parts together in a way that holds the listener’s attention from start to finish without feeling redundant. There’s appeal here for the ultra-brutal crowd, but that’s also where the line seems to end at the moment.