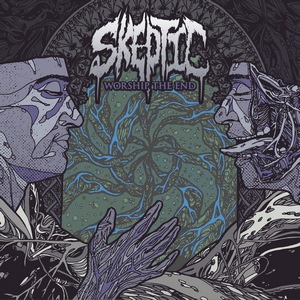 With the dawn of the Internet and computer age, band debuts can run the gamut – quality-wise. A first release no longer implies that it’s going to sound muddled or unexperienced, provided the members put some time and effort into it. In fact, the playing field has been leveled and debuts can flat-out impress as much as a season veteran’s lastest effort. Such is the case for the debut from upstate NY’s Skeptic, who deliver tech death in flavors that genre fans will find quite appealing on Worship the End.

Some of the appeal is that they never go too far overboard with the tech elements. It’s quite obvious that tech death is the stylistic starting point as “Skinchanger” begins to erupt from the speakers, and notable that the fresh act can understand that there needs to be a line drawn between songwriting and just showing how fast and technical one can play. The six songs represented here show a pleasant amount of diversity in approach, weaving in melodies, groove, and brutality alongside the tech-infused onslaught. “Aquiline” shines in this regard, with bottom-heavy groove and mid-tempo bludgeoning providing a memorable baseline that expands outward into more explosive tech displays and leads. Two songs hit above the 7-minute mark – which can lead to the downfall of many promising bands in this field, but Skeptic really hit these two out of the park (“Goddess of Worms” and “The Third Side of the Coin”) by using some extra emphasis on melody, with the former even including a few lines of non-growled vocals. Both have the high speed that fans will be looking for, and wisely avoid too much “atmosphere,” which could bog them down, and instead let the melodic soloing fly high.

All in all, Worship the End is a promising debut from another new entry into the tech death field. Skeptic keep it moving and retain memorability due to mixing it up from track to track, and focusing on tech as only one element of a balanced death metal formula (not to mention avoiding the increasingly trendy atmospheric route). Lots of potential here as the band moves forward.