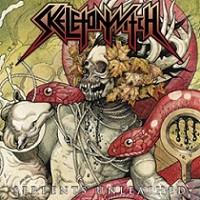 Having glided through the treacherous third album territory rather easily with 2011’s Forever Abomination, Athens, OH death/black/thrash gang Skeletonwitch will probably need to figure out sooner or later if they want to rest on their creative laurels (see: The Black Dahlia Murder), or make an attempt to further their career by including some sonic wrinkles. Serpents Unleashed doesn’t blaze a great deal of new territory for the band, yet in spots, the results are unmistakable: These guys are probably the best America has to offer when it comes to a thrash hybrid.

Like its predecessor, Serpents Unleashed hones in on primarily one tempo map across 11 cuts. We probably don’t have to tell you what the tempo rate is given the band’s previous proclivity to get in bed with double-bass and Lombardo beats, but this is where occasional mid-tempo action helps, like at the beginning of “Unending, Everliving” and “This Evil Embrace.” The song prior, “Burned From Bone,” though, might be the band’s most scathing cut to date, with a raucous tremolo-picked harmony run that out-evils and out-blacks anything in its path.

Because there’s this constant output of vertical death/thrash action, one has to the occasional sifting through the riff barrage for items of choice. Thankfully, we can point to the nimble chord wrangling on “I Am of Death (Hell Has Arrived)” and sinister hum of “Born of the Light That Does Not Shine,” which is the most Scandinavian-sounding number in the bunch.

Hopefully the Skeletonwitch gents are smart enough to realize that another album of Midwestern/Nordic thrash bashing as Serpents Unleashed will put them in a precarious spot. Yet, the guitar ideas are too broad, and the band’s melodic grip that routinely avoids saccharine territory puts them in a position to branch out in any direction they choose. Fingers crossed it happens next ‘go-round. For now, Serpents Unleashed will ably get the job done, much like all of the band’s catalog has.