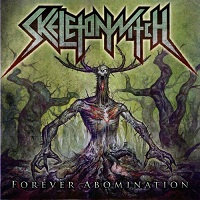 One of the real bastions of hope in the North American metal scene, Skeletonwitch stand on the cusp of breaking out of their support status and into true headliner ranking with Forever Abomination. To peg these guys as straight-thrash is a true injustice, even if thrash beats (and other thrash-related ideas) are rampant; rather, there’s some serious depth and aggression to the album’s 11 tracks that it makes most of the retro thrash movement look like a bunch of uncreative pansies.

Little tweaks have been made to the band’s sound since 2009’s underratedBreathing the Fire, but they’re awfully subtle, and if anything, it’s in the sense that these songs

are more compact. Beyond Chase Garnette’s one-dimensional bark (which has always made this scribe think of Witchery), S-Witch comes at you from all angles, occasionally moving outside of the d-beat and thrashy zone, like on “Reduced to the Failure of Prayer,” which manages to integrate black, thrash, and power metal into one song.

The nimble “Of Ash and Torment” is a winner, highlighted by new drummer Dustin Boltjes fast and accurate feet. Boltjes often emerges as the x-factor for a lot of these songs, saddled with the responsibility of keeping things in Lombardo-time (he does) and interesting (he does that as well). Given that most of these jams are full-bore, all the time, finding the former Demiricous skin-basher is a major coup.

Forever Abomination makes quick work of things, and rarely wears out on the listener. It’s no small feat in this realm, given how often anything and everything of the fast and furious variety goes sour. For Skeletonwich, their versatility isn’t nearly close to becoming as fleshed-out as it can be, with the gashing melodic jabs of “Cleaver of Souls” ultimately proving there’s a lot of meat on the bones of a band that is improving right before our eyes. Heart-warming, really.