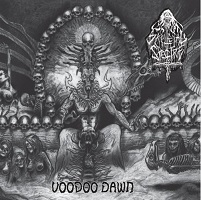 A multi-national, dual gender outfit with two of the members going under pseudonyms (2008 (drums) and Behold the Pentagram (guitars, bass), respectively), one wouldn’t initially peg Skeletal Spectre as a band capable of providing a good death metal time. On the surface, their third album Voodoo Dawn had all the trappings of a paint-by-numbers, play it safe retro death metal album – just look at the cover, for chrissakes. Then, vocalist Vanessa Nocera opens her mouth, the riffs slap skin with mid-90’s Entombed, and we’re off to a familiar place, but hardly resistant in doing so.

Nocera (who also does time in Howling, Scaremaker, and Wooden Stake) isn’t as much of a defining factor as she is a worthy complement to the band’s raucous Swedish, but surprisingly mournful death metal sound. Her screams have some heft to them (FYI: saying “heft” around the ladies is never a good idea), and it makes the gash and thrash of the opening title track easy to go down, especially when a slick evil guitar break goes down at the song’s 3/4’s mark. Her sole clean vocal excursion on “Flip-Side of Satan” isn’t worth getting excited about, so having her stick to the nuts and bolts should suit the band just fine.

The fact that Voodoo Dawn occasionally has a dip with Gothic doom is what pushes it past the brink. Mixed in with what is a very loud and proud guitar tone (someone was having fun at the mixing board), the leanings of Paradise Lost’s Gothic and the spare Lake of Tears idea wasn’t lost on this scribe. It’s why the tremor of “Shallow Grave” works so well; it’s more “Out of Hand” than Left Hand Path, if you pick up what we’re putting down, and is the primary reason Voodoo Dawn can skate past most of the retro brigade with ease.