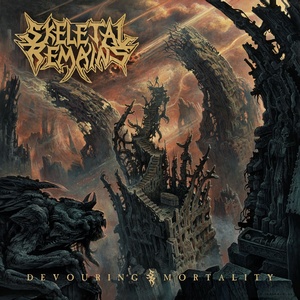 With as much old school flavored death metal comes through the pipes nowadays, it takes some effort and skill to stand out in the pack. Though it’s something that Skeletal Remains has been able to do across two full-lengths previously. While there’s some homage to the Floridian and Dutch scenes, the band does a good job to keep things somewhat more fresh and interesting.

When it comes to an old school-ish release like this, it’s all about whether or not the riffs hit the mark, and Devouring Mortality is full of aggressive and memorable riffing. It’s the type of album where you simply move from one “whoa” riff to another. The band can inject a somewhat thrashier feel than many of their contemporaries, and this also helps with the diversity of the album. As does their ability to utilize a number of different influences into their sound, as opposed to the many that simply take one or two and run with it. There’s no point in dissecting down the influences, but the band has a subtle way of making it clear the older death metal bands that have played a role in their songwriting. To simply view one song, “Seismic Abyss,” which opens with a breakneck tempo before slowing into a more groovy mid-tempo stomp and then alternating between the two (with a frantic solo thrown in for good measure), it’s truly hard to find ‘the best riff,’ as it doesn’t matter the speed at which they play since the enthusiasm in the riffing is so abundantly clear. Lastly, the production doesn’t muddle things up in becoming too retro – while it sounds like an old school death metal band, it still keeps the sound clear enough to maximize enjoyment.

A straight-forward attack that completely works, Skeletal Remains are on top of their game for Devouring Mortality. You know what you are going to get, but it consistently stomps, grooves, blasts, and rips so hard that you’ll be headbanging too hard to notice. 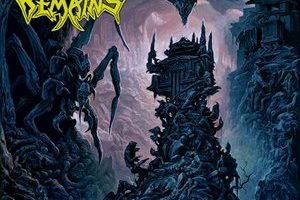