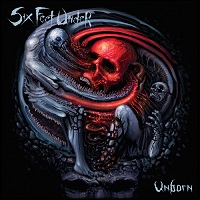 No strangers to turning new albums around faster than most, Six Feet Under are back with Unborn, which comes off the heels of last year’s Undead. Apparently, Chris Barnes has some type of concept in mind with these two albums, even though his patented vocal belch has once again, become indecipherable. By all accounts, the two albums were recorded in tandem, with Barnes enlisting the help of former Chimaira guitarist Rob Arnold, Whitechapel guitarist Ben Savage, and Torture Killer’s Jari Laine to assist in the writing of the album(s). Guess Barnes lost Bob Rusay’s phone number…

As a first for Six Feet Under and even Barnes, an acoustic guitar is used at the beginning of “Neuro Osmosis.” A trail to be blazed? Not exactly. Unborn hits like a sledgehammer, though, with heaps of simplistic, no-brainer riffs weaving their way around Barnes’ constant vocal patterns. It works well in spots, specifically the bulldozing “Prophecy” and the sinister “Incision.” Then there’s staid and flat numbers like “Fragment,” which falls over itself, and “The Sinister Craving,” a song where Barnes’ voice becomes a bit too much to bear, especially when he heads into pig squeal territory.

Hopefully Six Feet Under doesn’t engulf itself in a period of mediocrity like it did around the mid-00’s, where some type of release was an annual occasion. The band is very capable of wearing on people (blame Barnes), and when you look at the big picture, an album such as Unborn threatens to come and go just as fast as 13 and Commandment did.