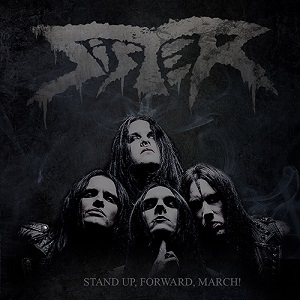 Appropriately saluted as the bastard child of every sleazy hard rock band under the sun, Sweden’s Sister would also pass as visual Black Veil Brides lookalikes if a keen eye was not employed. Their look is meant to match the music, or, is their music meant to match their look? Either way, the Swedes have it made it to their album, Stand Up, Forward, March, this, after two somewhat meddling albums by way of 2011’s Hated and 2014’s Disguised Vultures, both of which serve as a boilerplate for this 11-song offering.

Previous descriptions of vocalist Jamie Anderson as an Alexi Laiho (Children of Bodom) soundalike have thwarted the band’s attempts at entering higher-rung rock territory. Lead single “Carved in Stone” looks to change all of that. Employing a rather obvious nod to Axl Rose’s cat-scratch-shriek, “Carved in Stone” gets in with a cowbell and an easy chorus, thus allowing the song to saunter its way through the GNR/LA Guns/Faster Pussycat backstage room corridor. Would-be unruly jams like “Trail of Destruction” and “Let it Bleed” hover around the same territory with sleek punk, sub-metal tactics, and the preferable amount of Sunset Strip attitude, simply just coming from Scandinavia.

You could look at Gehennah, another dirty needle outfit on Metal Blade, as a close cousin to Sister, although Gehennah appears to be more interested in staying in the alley overnight passed out, while Sister is there for a quickie, then back to its gaggle of groupies. There’s the element of swagger involved with Stand Up, Forward, March, which in most cases would get a band laughed at, but for Sister, there’s an understanding of just how hard they’re trying to bring the debauched ’80s back. May they one day succeed.