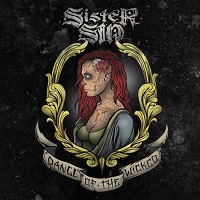 Arguably the best of the nasty, gritty female-fronted rock/metal bands, Sister Sin have hung around long enough to have their first album get the reissue treatment. The album in question is Dance of the Wicked, which the band released independently in 2003. An update in cover art and some bonus tracks thrown into the mix, the very motley (and we mean that in a sonic sense) beginnings of Sister Sin show a band still tinkering with its identity.

Considering some of the band’s more recent fare (specifically last year’s Now and Forever) have a Motley Crue-styled edge, it’s no surprise the songs on Dance of the Wicked are even more derived from the riff canon of Mick Mars. The Too Fast for Love sleaze of “Kiss the Sky” flaunts itself pretty well (nice cowbell), while the title track follows the same path as the Crue’s “Primal Scream.” Similarities aside, singer Liv Jagrell sounds the most refined and mature out of the batch, and while the ballad “Tragedy Loves Company” is an obvious misstep, the bulk of the album’s cuts seethe and spit gobs of attitude.

Their 2010 True Sounds of the Underground release is probably the best starting point for Sister Sin, who have become the go-to opening back for the likes of Motorhead, Doro, and Otep. A shame they haven’t shared the stage with Motley Crue, but anyone will get more than enough Crue-action on Dance of the Wicked.